Corporate Board of Directors

REAA consists of local chapters which function under a corporate board. The corporate board oversees strategic planning and decisions such as budget allocation, education approval, website direction and maintenance, political outreach, chapter development, and committee organization.  Corporate board members are elected from existing chapter boards. All positions are volunteer. Joe Lynch Corporate President
Joe has served on the Corporate Board Since 2016 and on the Sacramento Chapter Board since 2012.  Joe is Past President of the Sacramento Chapter.  Joe is a Certified Real Estate Appraiser with twenty years of experience valuing properties in the Sacramento region and outer northern San Francisco Bay Area.  Before entering the appraisal field, he worked as a business analyst at a large music and video distribution company and was a consultant for Microsoft's public sector sales division.  He developed and taught the class "Pivot Tables for. Appraisers" and will be working on other Excel classes this year.  He is an affiliate member of the Yolo. Board of Realtors and was a scoutmaster for Boy Scout Troop 131 in Woodland for many years.  Go Ags!  When not appraising, Joe bikes, camps, backpacks, and watches Manchester United soccer games. Mark Lindsay Corporate Vice President
Mark has served on the Corporate Board since 2010 and the North Bay Chapter Board since its inception in 2008.   Mark was the founding Vice President of the North Bay Chapter.  Mark has been a licensed appraiser since 1992. His career started with a small independent firm in San Rafael, California. Shortly after licensing in 1991, he worked for Bank of America as a staff appraiser, senior appraiser, and finally on special projects for the national appraisal group. He took a position with Irwin Home Equity as the manager of the appraisal department managing appraisal services and reviews for retail, wholesale and correspondent lending in 31 states. A desire to work closer to home brought him to Washington Mutual where he won the 2005 Kudos award for production, nationwide recognition for the top 1% in the company. With a variety of production, review, and credit risk experiences gained in the prior years, he decided to leave banking and has been self-employed since 2005.  His firm specializes in Marin county valuation projects and he resides with his wife in Sonoma. Jessica DiMaggio Corporate Secretary
Jessica is a native of the East Bay with a passion for local architecture, modern building methods, and analyzing market trends. She began working as the office manager of an appraisal firm in 1998. After completing her degree in Sociocultural Anthropology, she returned to appraising, enjoying the analytical nature of real estate valuation. In 2005 she earned a "Certified Residential Real Estate Appraiser" credential from the state of California, and in 2008 opened her own firm, Diablo Valley Appraisals. Jessica specializes in homes located along the 680/24 corridor, unique and complex properties, retrospective estate-settlement appraisals, and market value appraisals for private party and lending purposes.  Jessica is a member of the East Bay Chapter. Rob Perez Corporate Treasurer
Rob has served on the Corporate Board since 2018 and on the Sacramento Chapter Board since 2016.  Rob is Past President of the Sacramento Chapter.  Before entering the real estate industry, Rob was an M1-A1 tank crew member in the US Army.  Rob began his career in 1998 assisting a certified appraiser while he finished his CIS business degree at the University of Northern Colorado.  He then moved to California and used his computer/networking & appraisal knowledge for a start-up appraisal company in 2002 that eventually went nationwide.  In 2006, he became an independent fee appraiser and has seen the ups and downs of the market.  Rob is also a licensed CA real estate broker, a pool shark, and a tequila connoisseur! Vicki Keeler Corporate Education Chairperson
Vicki is the chairperson for Education within REAA.  Vicki Keeler grew up on the tennis courts and baseball fields of Santa Barbara. Vicki holds a real estate license and has been appraising since before cell phones, which is over 30 years. Vicki and her husband Tom started out appraising in 9 counties and have paired it down to Sacramento, Placer, El Dorado, and parts of Yolo. Vicki works primarily with Credit Unions and specializes in Relocation appraisals. Vicki is one of the founding members of the local appraiser group that eventually became REAA. Vicki is currently the Director of Education in charge of developing continuing education for appraisers. Short-term goals are to continue appraising and educating. Long term goal is to hit the road with a faithful sidekick Kody the standard poodle. Brenton is President of the East Bay Chapter.  Brenton is a Certified General Appraiser with 25+ years of appraisal experience.  He graduated from California State University Sacramento (CSUS) with a BS in Business Administration. He completed concentrations in both Real Estate/Land Use Affairs and Finance.  He also earned a Minor in Economics.  Upon graduating from CSUS he was hired by Ousley and Associates as an Appraiser Trainee. He then went on to appraiser positions with California Federal Savings & Loan (Cal Fed) and Steve Walkup & Associates. He is currently the principal of Brenton Aichroth & Associates. His appraisal experience includes complex SFR's, FHA appraisals, REO properties, apartment buildings, mixed-use properties, appraisal reviews as well as completing assignments for Attorneys, CPAs/Financial Planners, and Realtors.  Brenton is also a licensed Real Estate Broker.  Brenton lives in Walnut Creek with his wife Nancy and son Zachary. 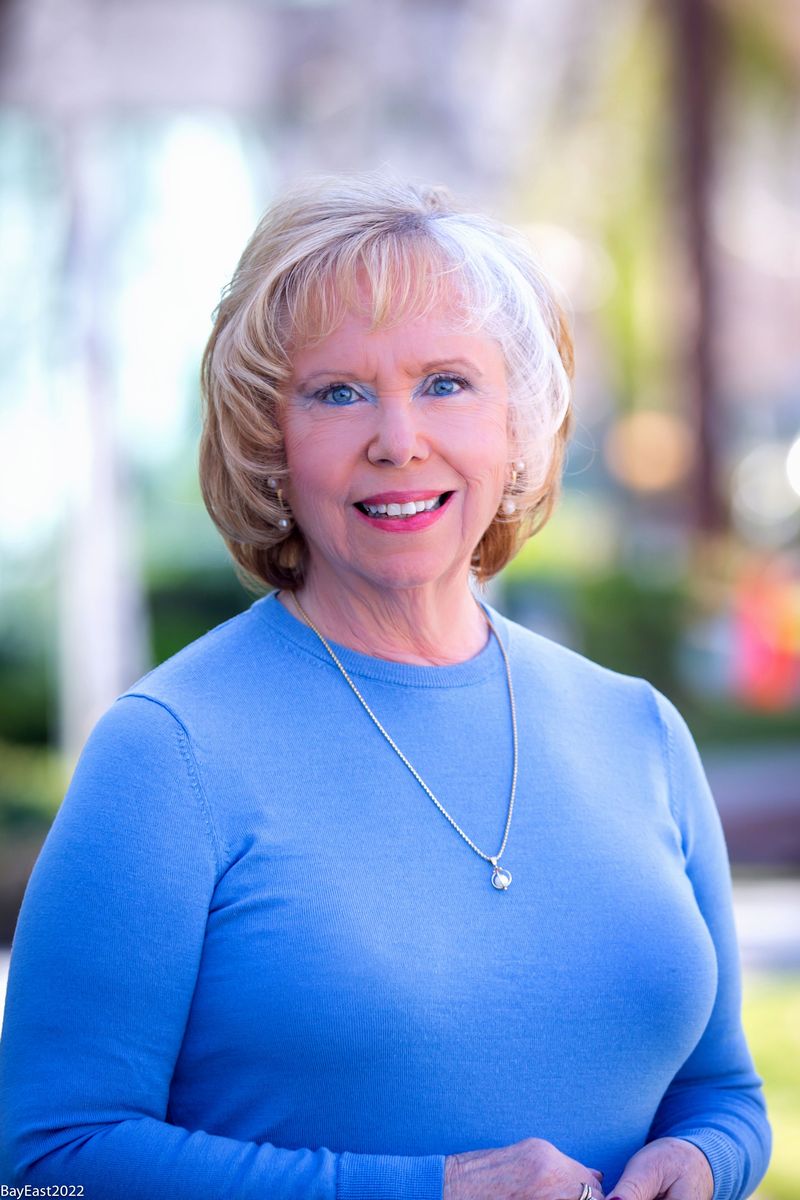 B.Penny Woods Corporate Past President
Penny has served on the Corporate Board since 2011 and the East Bay Chapter Board from its inception in 2009 to 2015.   Penny, the owner of BPW Appraisal & Realty Service based in Pleasanton, CA, has been working as an appraiser for the past 34 years, coming from a background in property management and real estate sales. She got her start in appraising by working for a fee appraisal firm; obtaining appraisal experience with both residential and small commercial properties. In 1994 she started her own firm and now does only residential appraisal work. Penny specializes in unique and unusual properties, completing assignments for probate, divorce, estate planning, litigation & expert witness testimony, earth movement, fire damage, and insurance claims. She is excited to have been a founding member of the East Bay Chapter of REAA and believes that the class information, variety of different people, and the industry networking that REAA provides to its members are invaluable in our changing work environment. Brian Melsheimer Corporate Director
Brian has served on the Corporate Board since 2020 and the Sacramento Chapter Board since 2018.  Brian is the current President of the Sacramento Chapter Board.  He is a Certified Real Estate Appraiser and owner of Sierra Nevada Appraisal Group in Grass Valley, CA.  He attended Sonoma State University, earning a B.S. degree in Economics with an emphasis in Microeconomics and Econometrics.  Brian began as an appraisal trainee in 2003, becoming licensed in 2005.  His passion and knack for the business grew and he worked his way to a Certified Residential Appraisal License in 2006.  He became FHA Certified in 2008 and obtained a position on the VA Appraisal panel in 2016.  When he's not appraising, Brian enjoys backpacking, hiking, woodworking, and spending time with his family and golden retriever, Pliny. Carolyn Richards Corporate Director
Carolyn has served on the Corporate Board since 2020 and the Central Valley Chapter Board since 2018.  Carolyn is the current President of the Central Valley Chapter.  While practicing real estate in Visalia in the 1970’s, Carolyn was a board of directors member on the local board of Realtors, a member of the California Association of Realtors, NAR, and worked on the legislative committee which helped to create the first time home buyers program. She also assisted two general contractors in completing their home building projects between 1977 & 1983. With the real estate market still in the tank in 1981, she gravitated toward appraising. In 1985 her husband Karl shut down his cattle business and joined her in appraising. Together they started “Richards Appraisals”, have remodeled 16 houses, and appraised thousands. She was the appraiser liaison to the Visalia legislative group and on the College of Sequoias Foundation board for several years. In 2001 Carolyn joined the Tulare County Executives Association as their appraiser representative and has served as president 3 times. It is one of the best networking groups in the tri-county area. Carolyn has been an annual speaker for “Realtor & appraiser personal safety”, a guest speaker at College of the Sequoias, and continuously councils homeowners on cost-effective ways to remodel their homes. She has been FHA-approved since 1984. Her business partner/husband is a VA & FHA appraiser and together they enjoy ballroom dancing.

Cancellations will be accepted by email to info@reaa.org and must be dated and timed prior to the close of online registration.  Refund fees will apply and vary by event.  Refunds will be made to the original credit card used to register.

Donate to a Member

Amir Sanii-Ghomi, a North Bay member, was recently diagnosed with a severe stroke and needs your help.

Open to all Real Estate Appraisers.  Find out what appraisers are talking about